ShieldBearer is a 2D game written in C# using the Unity Engine for the GTMK 2019 game jam. Developed by Andy Burns (@MechanicalBird) and Matt Hoffman (@lhoffl)

There is only one button, it is space.

(Just kidding you can move now that the jam is over, use WASD)

Glad you found a use for some of the assets I made. Fun game idea, it is cool to see someone else use some of the sprites I made.

Thanks for the cool assets!

As much as I like how the menu gives a sneak peak into how the shield works, I just feel like it was way too confusing to have to hold space to select an option.  As much as it fits the theme of using only one button, I don't think it should apply to the menu. It makes navigating a lot harder than it should be.

Anyways, to the meat of this game, it just feels rather odd controlling the spaceship. First off, the ship always has this up and down motion. It's rather hard to get used to since the shield follows the ship wherever it goes. It just feels that you are not in control because you can't control the ship even though it's constantly moving. Secondly, the way the shield rotates... it's a bit disorienting trying to have it go the right direction. Every time you press the space bar, it ends up going the opposite way each time. While it's really not a bad thing, there's no clear indication as to which way it will go and it combined with the constant moving ship creates an uncomfortable experience. I think that using one button to control the shield could be a potentially good idea, but the game also needs make the player feel in control.

The menu navigation is definitely not intuitive, the menu was added close to the end of development. If we expand on this idea, we'll definitely change it.

We've also heard a lot of feedback about the shield controls and are considering adding an indicator light to show the next direction.

Thanks for playing and thanks for the feedback!

I would definitely have used standard controls on the menu and left the 'one button' to the game.

Clever name and interesting idea, but having the direction reverse every time doesn't feel intuitive.

Thanks for the feedback!

We'll definitely be changing the way the menu is navigated.

If you can't figure out the menu, try holding space. 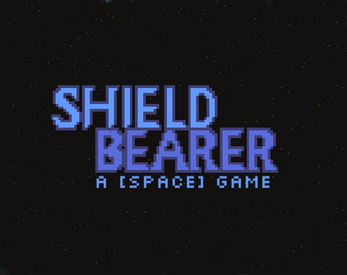